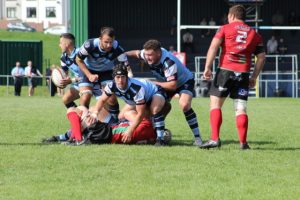 Bargoed made a good start but a couple of errors and three early penalties, gave the visitors a three point lead with a Jack Maynard penalty.

Llandovery scored again when a couple of missed tackles in the visitors 22 saw them attack from deep and score in the corner Shaun Miles, converted by Maynard.

The Bulls responded well and had a period of sustained pressure but a couple of handling errors let the Drovers off the hook. However after the visitors were penalised Josh Prosser converted for Bargoed from 40 yards to make it 10-3.

Bargoed conceded another penalty and Llandovery kicked to corner but good lineout defence resulted in a pen to Bargoed.

From a Line-out drive the Bulls worked the ball through a couple of phases and a cross field kick from Prosser saw Ashley Norton win the ball in the air and score in the corner. Prosser converted to make it 10-10.

Llandovery continued to play with width, and managed to get a position close to the Bargoed line and when the Home scrum came under pressure and collapsed the Drovers got a penalty try

The second half started with Bargoed again giving the ball away cheaply and from a scrum Llandovery attacked scrum right and an inside ball  saw them get over the gain line. They were patient in attack and went through the phases for Berian Watkins to score from close range, Maynard converted for a 31-10 lead.

Two furthe tried came from more Bargoed errors and the Drovers were 50-10 ahead.

Bargoed managed to apply pressure by finally managing to keep the ball and go through the phases. They had the upper hand at scrum time and when two penalties were conceded on the third the Ref awarded a pen try 50-17

Bargoed scores again after good work by Matt Billett and when it was moved wide strong running wing Ashley Norton scored in the corner.

The Drovers bounced back with turnover ball again punishing Bargoed with ball Prop Jamie Hughes going over for a converted try.

The final score went to Llandovery when another attack broke down and centre Ryan Evans capitalised to score and take the final score to 62-22 to the visitors.

Bargoed will rue handling errors and missed tackles in a sub standard performance but should take confidence from the amount of territory and possession they had throughout the game.