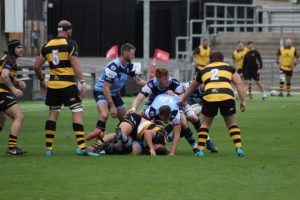 Bargoed visited Newport and on an immaculate surface at Rodney Parade, they made a promising start. Early pressure saw Bargoed’s Josh Prosser convert a penalty for a 3-0 lead only to let the home side back in after conceding a contact area penalty almost immediately for Matt O’Brien to bring the score back to 3-3.

Bargoed’s scrum was dominant and Newport conceded a few penalties and Prosser kicked one to put Bargoed into a 6-3 lead. However the Bulls were penalised for holding on in contact, and O’Brien converted to make it 6-6

The visitors managed to get into a good position in the Newport half and recycled well but an interception by wing Jonny Morris saw Newport get the first try which was converted by O’Brien, who then increased the lead to 16-6 with a penalty shortly after.

Newport now had real momentum and Morris again penetrated the Bargoed defence off a strike move from a lineout near half way, with centre Chay Smith scoring which was again converted.

Bargoed responded well and with their scrum on top they were awarded a penalty which Prosser converted to cut the deficit to 23-9 at half time.

The second half saw Bargoed mount pressure with good territory, but a couple errors at the lineout allowed the home side to relieve that pressure.

Bargoed again got into a good position and after a couple of effective driving lineouts prop John Lavender burrowed over with Prosser converting to make it 23- 16.

It looked like Bargoed were battling their way back into the game, but prop Nicky Thomas was yellow carded for a scrum infringement, there were a series of penalties which enabled Newport to reassert themselves. The Black and Ambers quickly carved out an opportunity and scored from short range with a converted try through Matthew Read.

They increased the lead to 37-16 when Elliot Frewen went over for another try converted by O’Brien.

Bargoed looked like they would score after good work by Prosser and Callum Jones carved out an opportunity down the right flank but good scramble defence from the home side held them out.

Bargoed were then down to 13 players when Jordan Howells was also sin binned Newport continued to press and shortly afterwards Adam Powell also received a yellow card after conceding a penalty close to the Bargoed line.

Newport opted for the scrum against the 13 man opposition and replacement scrum half Geraint Watkin went over for their fifth try which was converted by O’Brien.

Bargoed managed to get two late tries from Lewys Lippiett and Adam Powell both converted by Prosser for a final score of 44-30.

Bargoed shipped twenty one points with players in the sin bin, and that allowed Newport to capitalise and take the game away from them.

Head Coach David Lynch reflected on a disappointing performance, ‘There were some positives through our strong scrum and driving line out but ultimately there were too many errors in attack. Coupled with this we had a heavy penalty count against us and lost three players through yellow card offences.

We’re  not going to win games when we put ourselves in those positions, so we’ll focus on that this week, work hard, and look to improve in the areas we’ve identified ready for the visit of Carmarthen Quins next week.