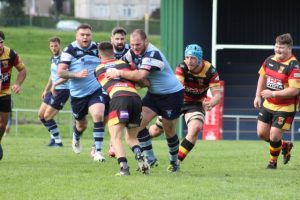 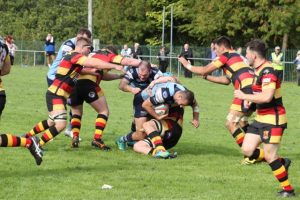 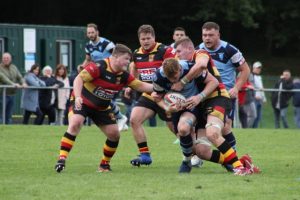 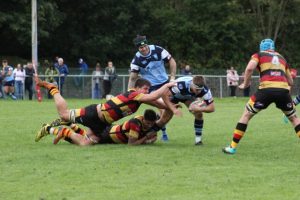 Bargoed entertained a Carmarthen Quins side who had got off to a decent start in this  season’s Principality Premiership with two wins from three.

Early on the home side were under pressure, but good defence allowed them to turn  the ball over. Bargoed managed to get a good position in the Quins 22 and moved the ball to Duane Dyer who was held up over the line.

Bargoed lost Callum Jones after 20 mins with a shoulder injury which saw Matt Billett take the field. Bargoed had plenty of possession and the set piece was going well but once again they gave a needless penalty away in the Quins 22 for a technical infringement at the lineout which allowed the visitors to escape. The Quins took advantage when they surprisingly shunted Bargoed back in the scrum, which allowed centre Nick Reynolds to arc around and beat two defenders to score a try in the corner,  converted by Aled Thomas.

The Bulls managed to get possession in the Quins half and started to build their attack only for the ball to be intercepted and again pressure was relieved. The Quins scored on the stroke of half time after a sustained attack saw the ball moved wide and an inside ball to Dale Ford saw him score a well constructed try, Thomas converted for a 14-0 lead.

Bargoed were under intense pressure early in the second half and struggled to get their hands on the ball as the Quins retained posession. The home side defended well for a considerable period of time but eventually conceded when hooker Torin Myhill went over in the corner for the Quins to lead 19-0.

Bargoed made a number of changes and after strong carries from Buckley and Dyer, centre Jordan Howells crashed over from close range, Josh Prosser converted to close the gap to 19-7.

The home side got some real momentum in this period and stretched the Quins but their defence was good and when Bargoed conceded a penalty out wide for holding on, they cleared their lines.

The West Wales based side again attacked with intent and from a driving lineout they thought they had scored but were just short. Bargoed managed to exit from their 22 through good scrum pressure and again looked to get themselves back in the game.

Bargoed did manage to get a late score after Grant Rogers went close after another good scrum with replacement props Lavender and Gardner-Key making a real impact in the tight exchanges. Back row colleague Alex Herbert was on hand to finish it off with a try from close in, which was converted by Prosser to make the final score 19-14.

Bargoed will see this as a missed opportunity to get their first win in the Premiership this season.

They created a few chances but errors at key times again cost them dearly. Bargoed worked hard for everything they got but a few critical defensive errors allowed the Quins to build a lead that was ultimately too great to overcome.

There were some positives though, as there were less unforced errors and they retained possession far better than in previous games. On top of this at times they also had a solid scrum and lineout.

Accuracy and consistency are the keys to improving, and moving forward they will look to build on the positives from this bonus point defeat as they prepare for a home game against Cross Keys next week.