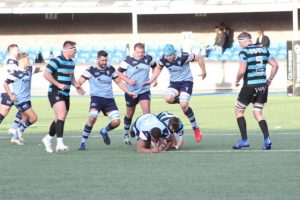 Bargoed made eight changes to the starting line up for the visit to Cardiff Arms Park for the Principality Premiership game against Cardiff RFC, as they looked to build on last week’s victory.

However they couldn’t have got off to a worse start as they conceded a soft try as a result of poor defence, only two minutes in, with centre Will Hole-Rees going over and Steffan Jones converting.

Bargoed were struggling to get out of the blocks with their scrum under pressure and missed tackles allowing Cardiff to get on the front foot and dominate the early exchanges.

They increased their lead when another missed tackle allowed Cardiff to get into the visitors 22 and Will Rees Hole got his second try, Jones again converting for a 14-0 lead with only ten minutes gone.

Bargoed finally started to apply some pressure but inaccuracy at the lineout allowed the home side to escape and to make things worse Bargoed then conceded a penalty to go behind 17-0.

Cardiff added to this when a poor kick chase from the visitors enabled Cardiff to launch a counter attack from inside their own half. The attack down the left saw Morgan Allen cross for the hosts third try, again converted by Jones.

Bargoed did manage to get a score before half time with a well constructed try and an inside ball from Josh Prosser for Matt Billett to cross, with Prosser converting, for a half time score of 24-7.

Bargoed got off to a good start and managed to apply some pressure which resulted in back rower Grant Rogers going over, Prosser converted and the visitors were back in the game at 24-14.

However Cardiff bounced back immediately and when The Bulls conceded a penalty for offside the home side kicked to the corner and were awarded a penalty try as Bargoed collapsed the drive. This increased the lead to 31-14, and a yellow card for Bargoed back rower Callum Davies.

Cardiff took full advantage and increased the lead when a scrum penalty was conceded. They kicked to the corner and another driving lineout try for Joe Tomlinson to take the home sides lead to 36-14.

Bargoed got their third try after 70 minutes when centre Jordan Howells crashed over after a good period of pressure, for Prosser to convert.

Cardiff also received a yellow card, and Bargoed were now chasing a fourth try but their attempts to counter attack failed through inaccuracy and a lack of composure.

Indeed it was Cardiff who had the final word with their sixth try when scrum half Martin Roberts sniped over after another driving lineout to clinch a 43-21 victory for the home side.

This was Bargoed’s poorest performance of the season and they will regret giving the home side so many early opportunities to build such a healthy lead.

They will also reflect on their failure to pick up a precious bonus point try in the last ten minutes.

Bargoed will look to bounce back and look forward to next week’s local derby against Bedwas.

They will need to improve their accuracy in both attack and defence, and hope to pick up some much needed points against the Bridgefield outfit.