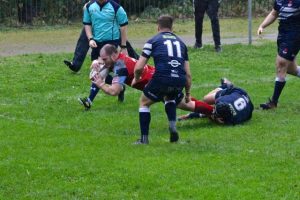 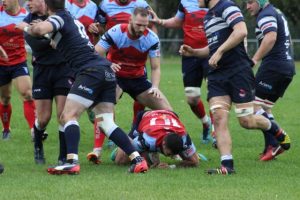 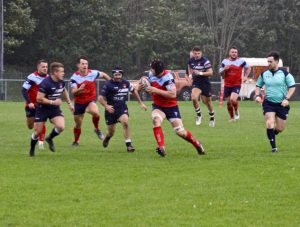 Bargoed welcomed Llanelli to a wet and windy Bargoed Park in a Principality Premiership match. Bargoed were playing into the wind in the first half, and after a couple of early exchanges in the Bargoed half Llanelli took the lead after second row Elliott Rees took a great line. They capitalised on the line break as a pinpoint pass put captain Nathan Hart away to score a try, which was converted by Ashley Sutton.

Bargoed bounced back with their forwards dominating possession through their effective scrum and driving lineout.

There was some excellent interplay and handling by forwards and backs as Bargoed broke into the Llanelli 22, but when John Lavender was tackled short of the line, Llanelli were able to escape as Bargoed conceded a contact area penalty.

However the Bulls continued to press and when Llanelli conceded a penalty Bargoed took advantage of a free play, and a cross kick from Josh Prosser was collected by Barney Nightingale to score wide out and make it 7-5.

The visitors used the wind and their kicking game to pin Bargoed back, but a couple of excellent defensive sets from Bargoed saw their line remain intact.

Llanelli continued to attack and after 30 minutes wing Ashley Norton has yellow carded for knocking the ball down as Llanelli moved the ball wide off a scrum.

A couple of minutes later Llanelli extended their lead when Bargoed went off their feet in the contact area and Sutton increased the lead to 10-5.

Bargoed responded well with another impressive attack, displaying excellent handling in difficult conditions and from this attack they got a penalty in front of the posts for Prosser to make it 10-8 at half time.

Bargoed started well with Ashley Norton winning the aerial battle and Ali Gardner-Key securing early possession, and allow Prosser to execute a probing kick to the corner to enable Bargoed to secure a position in the visitors 22.

The Bulls forwards drove the line-out for Ashley Gibson to crash over for an early 13-10 lead in the second half.

Bargoed increased the lead eight minutes later through their impressive scrum. They shunted Llanelli backwards and got a scrum penalty. They decided to scrum again and this time Referee Tom Spurrier had no hesitation in awarding Bargoed a penalty try to increase the lead to 20-10.

Llanelli were now looking to run the ball back at the home side into the wind, and got on the outside of the Bargoed defence but the hosts scrambled well and forced an error.

From the scrum Prosser put the ball deep into the Llanelli 22. The lineout was pinched by Grant Rogers who tapped down to hooker Rhys Buckley to plough over for the bonus point try.

Llanelli were chasing the game but Bargoed’s defence held firm again, and both sides then made a number of changes.

There were no further scores and although Llanelli pressured Bargoed late on they got no change against a tight defence, as the home side picked up their first bonus point victory 27-10.

Bargoed should take confidence from a good performance, playing the conditions superbly. They dominated through their powerful pack and Leadbeater and Prosser marshalled well at half back.

There was also some excellent open rugby played at times with forwards and backs inter passing and creating attacking opportunities. Both sides tried to move the ball but in the end it was Bargoed’s dominance up front that made the difference.

The squad will now relish the opportunity to build on this as they entertain the Wizards of Aberavon RFC next week, as they look to move up towards mid-table.