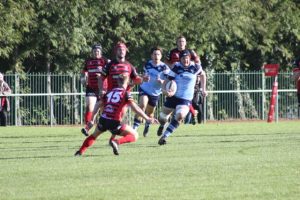 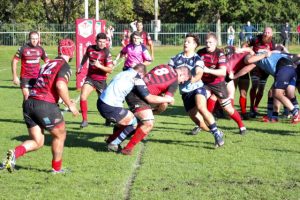 Bargoed produced an outstanding performance to get a bonus point win over top three side Aberavon in a Principality Premiership tie at a glorious Bargoed Park.

The early exchanges saw Bargoed use their powerful scrum to good use and backed this up with some good work in attack. They opened the scoring after 17 mins when wing Ashley Norton sliced through after the Bulls had gone through multiple phases to create the opportunity. Josh Prosser kicked the conversion and added to this with a penalty for Bargoed to lead 10-0

Aberavon bounced back though as centre Will Price went over and Captain James Garland converted to make it 10-7.

Bargoed had the next opportunity to score in this exciting tussle as Barney Nightingale stripped the ball and put Norton away, and when the Wizards conceded a penalty at the contact area Prosser was on hand to kick the penalty for a 13-7 lead.

Aberavon again bounced back and Garland kicked a penalty to make it 13-10.

Bargoed’s defence was excellent with everyone working hard and through this defensive pressure they forced an error and hacked through into the Aberavon 22. There was then a sustained period of pressure from Bargoed with their scrum again dominant and on 30 minutes after a couple of scrums, they got the reward with a penalty try to lead 20-10.

This was end to end stuff as the Wizards fought back and penetrated the Bargoed defence and when Grant Rogers killed the ball on the Bargoed line the Referee had no hesitation in giving him a yellow card. Bargoed continued to defend as if their life depended on it and kept Aberavon out just before half time to lead 20-10 at the break.

The second half saw Bargoed defending early on with a man down and when they managed to get on the front foot poor discipline saw a penalty reversed even though Aberavon hooker Cameron Lewis had a yellow card.

Bargoed looked like they were going to extend the lead with the impressive Norton making another break and when the ball was moved wide to Darren Humphries it looked like Bargoed were over. However the Wizards showed their resilience and got their hands on the ball and attacked from their own line which allowed pacy wing Shaun Pearce to score at the other end and close the gap to 20-15.

Aberavon conceded a scrum penalty on 65 minutes, and Prosser stepped up to increase the lead to 23-15.

The Wizards again got themselves on the front foot in this ding dong battle, and camped in the Bargoed 22. There followed over seven minutes of Aberavon pressure with Bargoed’s defence working really hard, it looked live the visitors were going to score wide out, but a knock on saw the Referee come back and yellow card Louis Blacker for obstruction. Aberavon took the three points to make it 23-18.

The Bulls then played some great stuff with replacement Jordan Purcell looking sharp, and making a break. He was tackled close to the try line, the ball was moved and that man Norton powered over for his second try to make it 28-18 with 12 minutes to go.

Bargoed bagged the bonus point try when once excellent defence resulted in an error and James Leadbeater went in for a deserved try converted by Prosser Bargoed added to this at the final whistle as Prosser kicked another penalty to make the final score 38-18.

This was a great advert for Premiership rugby with both sides showing attacking intent. The performance of the Bargoed pack was once again excellent and although the piano pushers more than did their bit, the piano players behind were equally excellent in their accuracy and work rate. Bargoed now head to RGC next week, who are one place above the Bulls.

Bargoed have certainly learnt the lessons from the disappointing defeat by Bedwas a couple of weeks ago and look galvanised as they approach a key part of the season. They should take huge confidence from the performances of the last two weeks as they look to improve on their current tenth place in the league.