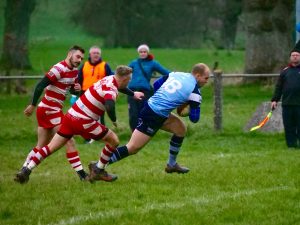 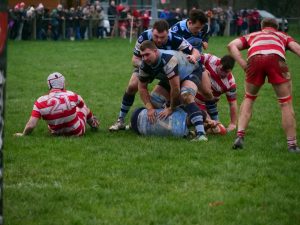 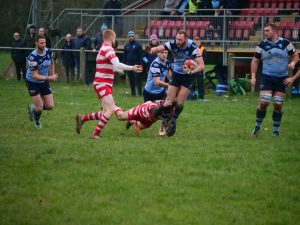 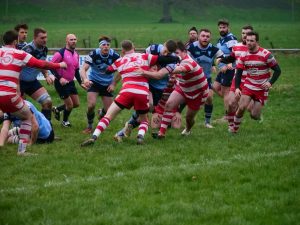 Bargoed travelled west to play a WRU National Cup tie against Championship side Newcastle Emlyn, looking for their first victory of 2019 and the opportunity for a good cup run.

The home side bounced back when poor defence from Bargoed saw them cut twice close to the ruck, and on the second occasion it saw scrum half Mike Jones get over the whitewash for a try converted by Shaun Leonard.

A couple of minutes later Bargoed found themselves 14-3 down when once again poor defence allowed the home side to penetrate off a line-out for Hayden Baldwin to score under the posts, Leonard again converted.

Bargoed slowly worked their way back into this game, and they drove a line-out 10 metres out from the hosts line and hooker Lewys Lippiett crashed over, Prosser converted to make it 14-8.

In this ding ding affair the hosts  came straight back and another defensive error saw Bargoed cut again and Shaun Leonard made no mistake to take advantage and score a try wide out, which he also converted for a 21-8 lead.

Bargoed came back into it and had their best period when they camped in the hosts half. They applied pressure through their scrum and driving line-out.

Lewys Lippiett got his second try from a driving maul, with Prosser converting. When Newcastle Emlyn full back Shaun Leonard was yellow carded, Bargoed took advantage with Barney Nightingale going over from close range for a try converted by Prosser to give a Bargoed the lead at 22-21.

The hosts showed that they weren’t going to lie down and fought back and when they pressurised the visitors close to the line, back rower Grant Rogers was yellow carded for collapsing the maul. However Bargoed held out to go in one point up at half time.

Bargoed started the second half well but a lack of composure and accuracy denied them any further points. The West Wales outfit created an opportunity down the left but they also failed to capitalise on this promising attack.

Bargoed showed what they could do in attack when a sweeping move started from behind their own line saw them get into the opposition 22 but inaccuracy again cost them.

Bargoed made some changes and with the hosts tiring they started to make some progress, retaining the ball through a number of phases before replacement centre Duan Thomas scored his first try for Bargoed, Prosser converted to give them a 29-21 lead with twenty minutes to go.

Bargoed were now on top in the territory and possession game and when Newcastle Emlyn collapsed a driving maul in their 22 a yellow card was issued with 8 minutes to go.

Bargoed put the game out of sight when centre Jordan Howells carved an opening to score after a couple of close range drives, and Prosser converted to get the win 36-21.

This was a good result but not a great performance against a dogged Newcastle Emlyn side. Bargoed did score five tries but they will be concerned about the continuing problems at line-out time, first half defence, and a poor kicking game.

It was good to see Geraint Edmunds get 80 minutes,  Bryce Morgan carried well, and Norton and Purcell looked dangerous on the outside when put into space.

The scrum and driving maul went well again, and there were some positives in attack late on.

Bargoed will now eagerly await the draw for the next round, and then have two away games coming up with Carmarthen Quins first up and Cross Keys the week after.