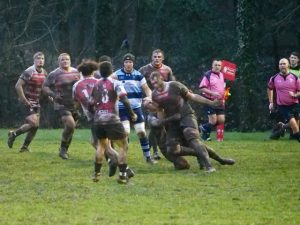 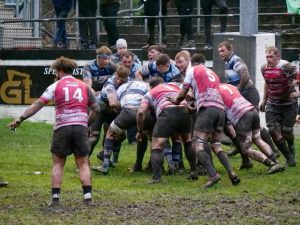 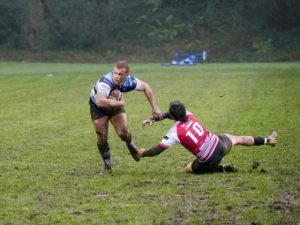 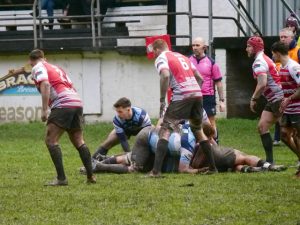 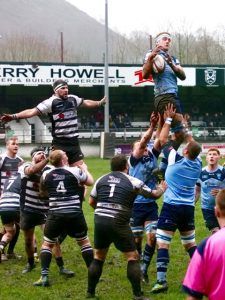 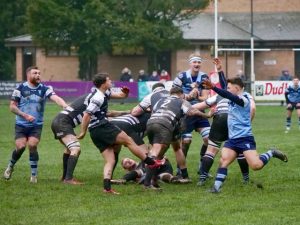 Bargoed were on the road again this week to play local Dragons rivals Cross Keys in the Principality Premiership.

Bargoed had been victorious in the last fixture against the Keys back in September with a 20-13 victory at home.

Cross Keys started well and pressure resulted in Bargoed conceding a contact area penalty after only 2 minutes and Jacob Botica made no mistake with the kick.

In difficult conditions it was clear that having a good set piece and kicking game were going to play a key part in the outcome.  The home side dominated territory and possession early on with the  Bargoed line-out struggling against a competitive Keys line-out defence.

The Keys increased their lead when Bargoed were scrambling back in defence and were penalised after 14 minutes for a high tackle, and Botica made it 6-0.

The game was dominated by the boot in a cagey affair as both sides looked to play in the right areas. However it was the home side that were winning the territory battle, and another penalty at the breakdown against Bargoed saw Botica convert it and after 23 minutes it was 9-0 to the home side.

However the Bulls fought back and in their first foray into the Keys 22 they drove a line-our and it was Captain Rhys Morgan who crashed over with Josh Prosser concerting superbly from the touchline to make it 9-7.

Cross Keys then dominated the vast majority of the remaining 10 minutes of the first half. Bargoed defended bravely but another penalty conceded saw Botica increase the lead to 12-7.

Bargoed did manage to get into the Keys half though and Josh Prosser nudged them closer with a fine penalty kick from over 40 yards in terrible conditions to make the half time score 12-10.

The first twenty minutes of the first half saw Bargoed dominate as they locked Cross Keys in their own half.

Josh Prosser agonisingly hit the post with a penalty kick but Bargoed continued to work hard both on and off the ball.

Bargoed were not to be denied though and they got themselves into a good attacking position. The Bargoed scrum was well on top, and after a series of scrums close in the Keys scrum buckled and the Referee awarded a penalty try as they took the lead 17-12.

They had the chance to build on this when good work again on the kick chase by Dyer and Nightingale forced a penalty but the kick went wide.

Cross Keys slowly started to get into Bargoed territory and when Bargoed conceded another penalty at the breakdown Botica put the kick over to make it 17-15.

Bargoed defended superbly for the next 15 minutes and when Cross Keys thought they were going to score the Bulls miraculously dislodged the ball to prevent a try.

Bargoed looked like they’d survived the onslaught but with a couple of minutes left on the clock they were penalised for a no arms tackle, and Botica stepped up to put the home side in front 18-17 and agonisingly take the game away from the Bulls as they came out on top.

Head Coach David Lynch stated ‘ I thought that our boys were heroic in the final 30 mins but our inability to gain field position down the slope eventually told. It’s tough to take but the league is very unforgiving’

Bargoed now look forward to a break from the league next week as they travel to St Helen’s to take on Swansea in the WRU Cup as they look to progress to the Quarter Finals.