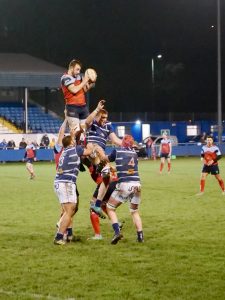 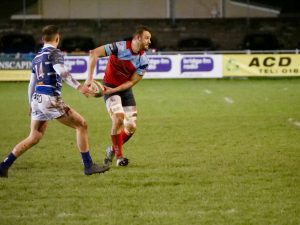 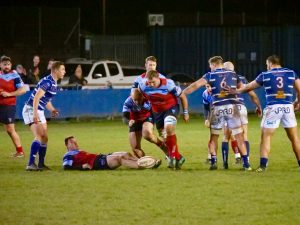 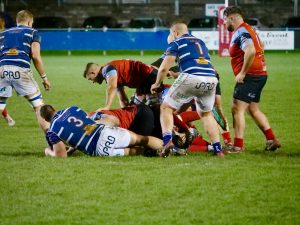 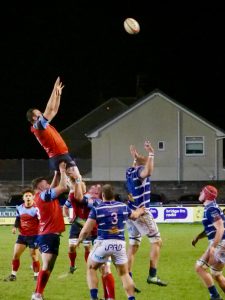 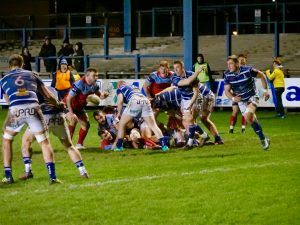 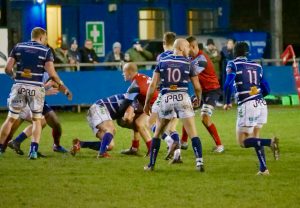 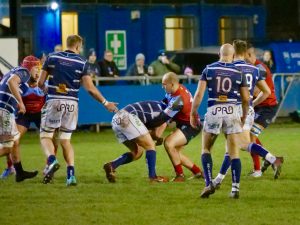 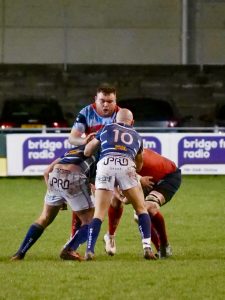 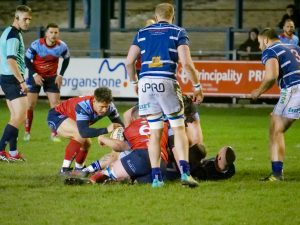 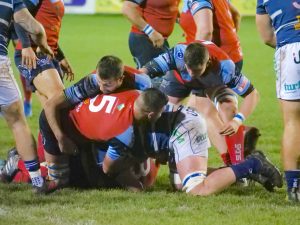 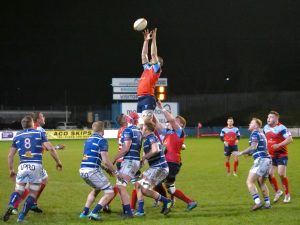 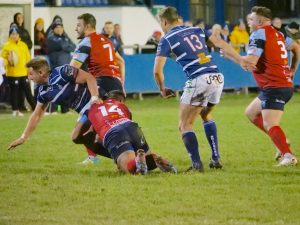 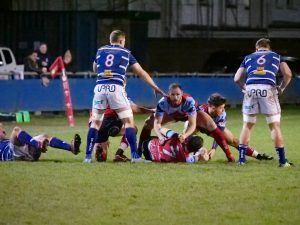 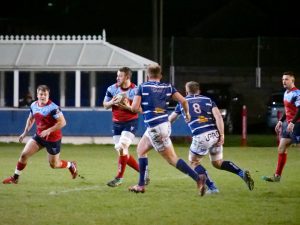 Bargoed visited Bridgend for another crucial Principality Premiership fixture, looking to build on last week’s victory against RGC to gain some more points in the battle to avoid relegation.

However it was the home side who had the better start with ball in hand, but Bargoed were equal to the task and defended well.

Bargoed slowly managed to gain some field position but failed to capitalise as they made too many errors in attack in Bridgend territory.

Bargoed conceded a couple of cheap penalties and allowed Bridgend an opportunity to escape from their half, and after they drove the line-out scrum half Chris Morgan scampered around the open side, and poor defence from Bargoed resulted in him getting the first try of the night.

Bargoed struggled to maintain possession to pressure the Bridgend defence but when they did the Ravens conceded a couple of penalties and with Josh Prosser in kicking distance he made no mistake to take it to 5-3 at half time.

The second half saw the weather change with the wind and rain picking up.

Bridgend scored their second try after 55 minutes when another defensive lapse by Bargoed saw Second row Ben Jones take advantage, Owen Howe converting to make it 12-6 to the hosts.

Bargoed wouldn’t lie down though and they scored a couple of minutes later from a cross kick by Prosser and good work by Barney Nightingale and Duane Dyer, see the latter get over in the corner to make it 12-11.

The turning point in the game came in the 65th minute when Adam Couple was penalised for a contact area infringement on the Bargoed 22 and received a yellow card.

Bridgend took advantage and after a sustained period of pressure Captain Nathan Edwards crashed over to make it 19-11.

Bargoed continued to work hard and a good kick chase saw Bargoed get the ball back, and Geraint Edmonds carried well in a flowing attack. However good scramble defence by the home side saw the Bargoed attack come to an end wide out.

Bridgend used the wind and kicked into the Bargoed half and after a few phases The Bulls found themselves short on the one side of the ruck and the Ravens took advantage for wing Caine Woolerton to score wide out against a 14 man defence and make it difficult for the visitors at 24-11.

Bargoed made some changes and got back to 15 players on the park, but inaccuracy in attack cost them and Bridgend used the increasing wind advantage to clear their lines.

The final score came from Bridgend with two minutes to go, as a tiring Bargoed defence saw replacement scrum half Connor Tatum score and Owen Howe convert to make it 31-11.

The Bulls fought back and ended the game on the attack but another error saw Bridgend kick the ball off and pick up the five points.

Bargoed will look back at this game and realise that this was another one that they were very much in contention to win.

They conceded 12 points on the yellow card, and combined with a poor first half where they failed to be accurate enough in attack, and critical defensive errors, they should have got more from this game.

There is no game for Bargoed next Saturday so the boys will knuckle down and work hard this week as they prepare for the visit of fellow strugglers Neath at Bargoed Park on the 30th April.