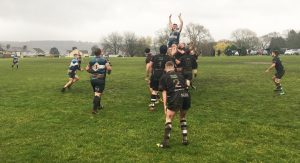 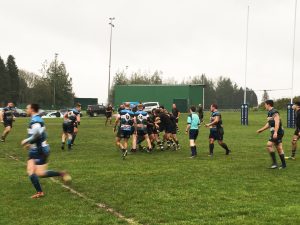 Bargoed 1st XV’s game fell foul if the weather on Saturday with the Trebanos pitch waterlogged.

The Youth game against RTB Ebbw Vale was also called off prior to the weekend.

It was left to The Warriors to fly the flag at home and they put in a great performance against a well organised Rhiwbina outfit as they looked to continue their challenge to defend their National 2nd XV Conference crown.

They started well and after good work in the contact area and great vision and accuracy from Jack Williams and Geraint Edmonds Ashley Gibson tan in from 30 yards to open the scoring.

They increased the lead after 12 minutes when a great break from Calum Jones saw him put Adam Jones away to score to make it 10-0.

Poor discipline led to Bargoed conceding a series of penalties which resulted in Rhiwbina gaining a foothold in the Bargoed 22, however a great defensive effort kept them out.

Bargoed’s scrum was going well with the front row of Nathan Jones, Jack Williams and Aaron Elliott causing the Squirrels some problems, and Liam Morris also did well when he came on as a replacement.

Bargoed scored again after 22 minutes when from a scrum stack attack Adam Jones cut a great line try to go over for his second try, Jones converted to make it 17-0 at half time.

Bargoed made a couple of changes and increased their lead when Calum Jones cut through to score try under the posts after another turnover in contact, he also converted to make it 24-0

Jones scores again shortly after when Ian Jenkins cleverly played out the back in an attack to put him over. He also converted to make it 31-0

The final score case from another attacking scrum when Ash Gibson picked up 25 metres out and put fellow back rower Jack Price in with an inside pass. Jones converted to make the final score
38-0.

Bargoed Veterans side ‘The Never Beens’ have a game on Saturday as they travel to Maesteg Celtic for  a mini tour and an early kick off before Wales v Barbarians.

There’s no other games on Saturday although Bargoed Youth are looking to arrange a game midweek or Friday with a few league games to catch up on.

The 1st XV also have a couple of games to re-arrange but they have a tough period up to Xmas and into the New Year with games against Ystrad Rhondda (H), Pontypool (A), Bedwas (H) and Cardiff Met (H) as they look to be in the hunt for promotion at the turn of the year.

They are also looking to schedule another tough home game with local rivals Nelson in the Mid District Cup.

They know how tough an assignment this is but this group are fiercely determined to battle all the way with a Premiership spot up for grabs for the National Championship and the Mid District Cup so it’s all to play for!!

Good news that Bargoed stalwart and Committee member Jeff Evans is in the mend and hopefully going to be returning home after a spell in hospital. Jeff is a popular member, and one of Bargoed RFC’s great characters. All the best Jeffrey from all at Bargoed RFC.