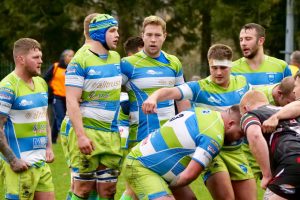 Bargoed hosted Ystrad Rhondda at Bargoed Park last Saturday as they looked to continue their fine run of form in the National Specsavers Championship.

The Bulls started well and took the lead after the visitors infringed, and Steffan Jones kicked a penalty to make it 3-0.

They increased their lead on 9 minutes, when they got into the opposition 22, and from a scrum ten yards out they got the drive on for No. 8 Adam Powell to get the try, Jones converted to increase the lead to 10-0.

Bargoed scored again after 16 minutes when a break from Darren Humphries resulted in Steff Jones getting the try to make it 15-0.

Although behind on the scoreboard Ystrad were making Bargoed work extremely hard to get any go forward, and it was over 20 minutes later that Bargoed got the next score. Steff Jones got his second try for a 20-0 lead, after good work from Matt Thomas, Grant Rogers and James Leadbeater.

Bargoed continued to pressure Ystrad and just before half time they got the bonus point when the impressive Kieron Brown carried well to score, Jones converted and they lead 27-0 at half time.

Bargoed made changes early in the second half and on 45 minutes, Rhys Humphries came off the bench and scored with his first touch, Jones converted.

The Bulls made further changes which seemed to disrupt their momentum for a while but on the hour Josh Prosser profited with a try after some great approach work by the forwards before Jones hit Prosser on a great line. Jones converted to make it 41-0 with Bargoed firmly in the driving seat.

Ystrad continued to work hard though, but they couldn’t prevent Prosser getting his second try on 66 minutes, which was again converted by Jones.

Bargoed finished Ystrad off with two late tries one from Darren Humphries and one from Duane Dyer, both converted by Jones to make the final score 62-0 in what was Bargoed’s most complete performance of the season.

Ystrad Rhondda are a good side but they met a Bargoed outfit who really hit their straps. The scoreline didn’t reflect the hard work that a well coached Ystrad outfit put in.

Bargoed were pleased with the result though as they know how dangerous Ystrad can be on their day.

This was a great team performance with the forwards working hard and the backs running some great angles to score some great tries. The approach play in attack, against a well organised Ystrad defence, was top drawer.

Next week Bargoed travel to Pontypool in another National Championship fixture.

The Warriors travelled to Cardiff and also got a win against St. Peters RFC in an important National Conference fixture, coming away with a 53-18 victory.

The Youth were also in action with a well deserved victory over local rivals Penallta with tries from Rhys Thomas, Keaton Davies, Sam Richards, Ethan Thomas and
Liam Jones.

This was a great team performance with everyone working hard for each other, with a few players unavailable.

There were debuts for prop Sam Mattei and Liam ‘Lamb Boy’ Jones. Mattei was particularly impressive at scrum time dismantling the opposition scrum on a number of occasions. Jones was excellent with some superb ball carrying, and defensive work.

This week the 1st XV travel to Pontypool for a top of the table clashing the Specsavers National Championship. The Warriors entertain Brecon at home in a National Conference fixture and the Youth are in action at Tredegar Ironsides.