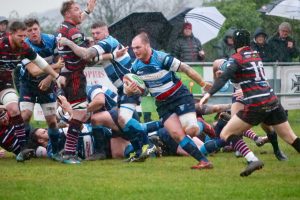 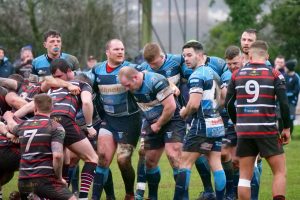 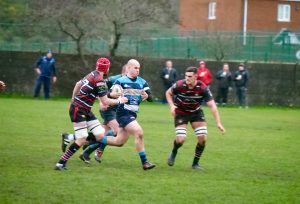 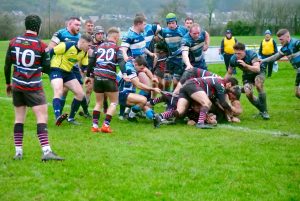 Bargoed travelled to Maesteg Quins in a National Championship tie on the weekend and came away with a hard fought 45-3 win.

The Bulls started well in difficult, blustery and damp conditions. Early pressure and a number of close range attacks saw scrum half Huw Rees snipe and score under the posts from a ruck, Steffan Jones converted to make it  7-0.

The home side bounced back when poor discipline from Bargoed allowed the Quins to apply pressure and they kicked a penalty to make it 7-3.

Bargoed used the wind to gain advantage through their kicking game and after another series of forward drives it was prop Kieron Brown who burrowed over, Jones converted to make it 14-3 after 25 minutes.

Bargoed were starting to dominate territory and possession and when the Quins had a player yellow carded they took advantage with an excellent driving line out for Adam Powell to crash over for their third try, Jones again converted to make it 21-3.

Bargoed managed to get the bonus point on the stroke of half time with Huw Rees scoring his second try wide out to make it 26-3 at half time.

The second half started with a bang and Bargoed looked to play more expansively against the wind. They were rewarded with Calum Jones crossing for a try wide out to lead 31-3.

Bargoed were now playing with real attacking ambition and after good approach work, Jordan Howells was next to profit with a well constructed try, which Jones converted.

The final score was deservedly scored by replacement wing and Adam Jones who cut inside to score, Jones converted to make it 45-3. However the Quins didn’t give in and nearly scored at the end, but great work from Calum Jones prevented the line being breached.

Bargoed Chairman Neil Carter was pleased with the victory and said ‘We knew this would be a tough game as the Quins are big and physical and this is a difficult place to get a win, so to come away with a bonus point in difficult conditions was a real plus.

We made a few changes for this game, and it was great to see Adam Jones, who is one of our youth products, play so well when given an opportunity, in his first outing this season. There was some great attacking rugby played in that second half with a couple of great tries’

Next week the 1st XV are home against Glamorgan Wanderers in another National Championship fixture.