Bargoed started well with a solid set piece and plenty of possession but it was Bridgend who scored first when the Blues took a strike against the head at a scrum on their 10 metre line, but a long pass was intercepted for Aaron Grabham to capitalise for the first try which went unconverted.

Bridgend added to this from a Bargoed scrum when an error in midfield resulted in another try to the home side, which was converted for a 12-0 lead.

Bargoed then had a period of pressure but a combination of good defence and handling errors cost them, and Bridgend kept them out and the home side cleared their lines.

Bridgend scored  again from a well executed strike move off a scrum to out Kyle Williams over, converted by Jamie Murphy. 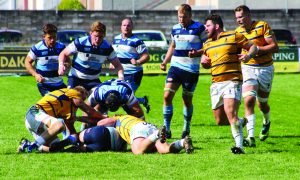 Bargoed struck back after a period of sustained pressure when Darren Humphries took a great angle to set up a ruck close to the line and Geraint Edmunds got the reward with a pick and drive from close range, converted by Josh Prosser on the stroke of half time 19-7.

Bargoed started the second half brightly with an early try through a driving line out for Geraint Edmunds to get his second try, converted again by Prosser.

The Bulls built on this with another try after 55 minutes with a try by Josh Williams, converted by Prosser. They increased their lead two minutes later after an Ashley Norton break finished by James Leadbeater, converted from wide out by Prosser 28-19

The home side bounced back after 63 minutes when poor defence allowed centre and captain Nathan Edwards to score and close the gap to 28-24.

The visitors managed to get a foothold in the Bridgend half and after a driving maul  was stopped a good carry from Louis Blacker enabled Josh Prosser to dummy and score from close range, he also converted to make it 35-24

In this ding dong affair it was Bridgend who scored next when Dan James scored from a ruck close in, converted by Huw Evans.

Josh Prosser increased Bargoed’s lead with a penalty with five minutes to go to lead 38-31.

Bridgend struck back with a try from Geraint Roberts, which went unconverted and a victory for the visitors 38-36.

Bargoed will take heart from an improved set piece and the tempo that they played with, looking threatening with ball in hand and clinical when opportunities came. There’s work to do in defence but generally the coaches were satisfied with the performance.

Head Coach David Lynch said ‘We let ourselves down with a few errors in the first half, but we’re really pleased with the attitude of the boys, and the attacking intent that we displayed.

We’ll continue to work hard and build on this but we certainly won’t underestimate the challenge that Llandovery will bring next week. We’re excited and can’t wait to kick off the Premiership season’