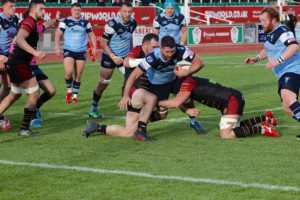 In dry but cold conditions RGC kicked off with a slight wind behind them, and immediately went on the attack with a series of rucks inside the Bargoed 22. They got the first score when prop Joe Simpson barged over with a pick and drive from short range within two minutes of kick off and Billy McBride converted.

Bargoed tried to bounce back and went on the attack. However they failed to find touch and RGC managed to get out of the danger area. The Bulls problems were compounded by some poor defence and a kick and chase saw RGC centre Tom Hughes win the race to score for a 12-0 lead after only 9 minutes.

Bargoed did manage to penetrate the RGC defence on a couple of occasions through incisive runs from Darren Humphries and Ashley Norton but too many errors in tackle and contact area situations resulted in turnovers.

Bargoed were made to pay again after 17 minutes as poor discipline allowed RGC to kick into the Bargoed 22 and drive the line-out. Bargoed conceded another penalty and RGC kept it tight and rumbled over with prop Sam Wainwright picking up the score this time, with McBride converting to make it 19-0.

Bargoed’s lack of accuracy didn’t allow them to build any momentum and again poor defence enabled RGC to create a scoring opportunity on 29 minutes, however inexplicably they dropped the ball with the line in sight.

Bargoed continued to plug away but made little headway against a well organised and committed RGC defence. Bargoed’s scrum had been one of the positives but just before half time they were under pressure and conceded a scrum penalty.

RGC kicked to touch, drove the line-out which the Bulls defended, and after intense pressure and a number of phases Bargoed conceded yet another penalty. RGC kept the pressure on with another kick and driving line-out and when Louis Blacker infringed the Referee awarded a penalty try and issued a yellow card to Blacker. The conversion by McBride was successful and Bargoed had a mountain to climb at 26-0 down as the whistle went for half time.

The second half saw RGC increase their lead as a combination of scrum pressure, poor defence and poor kicking allowed them to build pressure for Bryn Jones to crash over for their fifth try, which was converted by McBride for a 33-0 lead.

Bargoed made a few changes which seemed to have an impact and it was good to see Bryce Morgan returning after a number of months out with injury. The 50-70 minute period was their best of the game, where they maintained pressure on RGC and got their rewards when replacement outside half Callum Jones scooted over and converted to make it 33-7 with ten minutes to go.

There was no comeback though as RGC came straight back at the Bulls and from a midfield move off a short line-out an offload out of the tackle enabled Harri Evans to split the Bargoed defence and McBride converted the try to make the final score 40-7.

This was a disappointing performance particularly after the good form of the last couple of weeks.

The poor start didn’t help, being 19-0 down early on, and the coaching staff will be concerned about a number of facets of the game. In particular they’ll look to review their effectiveness in the contact area, defensive errors and lack of accuracy in attacking situations.

Plenty to work on but good news that there are some players returning from injury to create some more competition in the squad, as we approach a key period of the season with Friday night games against Bridgend, Neath and Swansea.

Bargoed now have a break, and a chance to reflect and build for the next challenge, and the next game will see them entertaining Bridgend in a Friday night fixture at Bargoed Park on the 9th November.