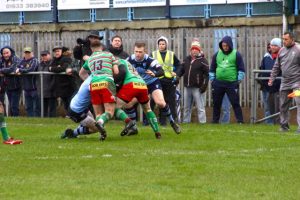 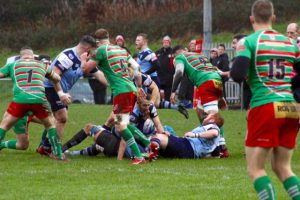 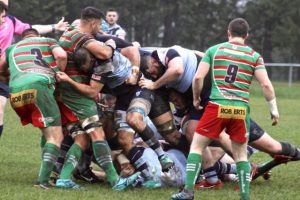 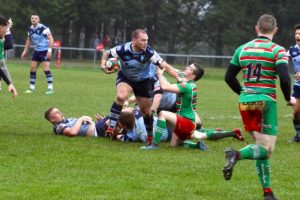 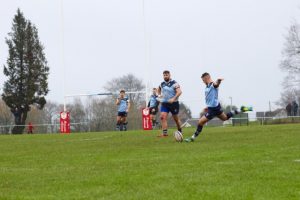 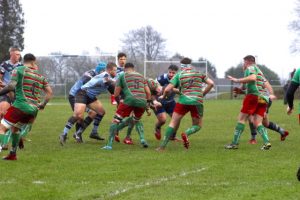 Bargoed welcomed Ebbw Vale to Bargoed Park for a Principality Premiership fixture, looking to bounce back after a run of three consecutive defeats. The visitors were bolstered by a number of Dragons regulars in Josh Lewis, Jack Dixon and Dafydd Howells.

The home side started well and early pressure saw The Steelmen concede a penalty that Josh Prosser slotted over for a 3-0 lead.  Ebbw responded by applying pressure on The Bulls and it was all square when Rhys Jones kicked a penalty for offside in front of the posts.

Bargoed struck back when Ebbw collapsed a powerful driving maul, and Prosser nudged Bargoed ahead with a 35 metre penalty after 13 minutes.

Ebbw struck back almost immediately when scored the first try when Jack Dixon picked up at the breakdown and surged through to score in the corner. Jones converted to give Ebbw a 10-6 lead. Just a couple of minutes later they made it 17-6 when Bargoed failed to deal with a high kick as Lewis Young scored after gathering the ball, Jones again converted.

Bargoed defended well for the next 15 minutes but when they conceded a dubious scrum penalty and then an extra ten yards for backchat Ebbw were in range and Jones made no mistake to take the lead to 20-6.

Bargoed hit back and dominated the last 10 minutes of the first half through their effective driving maul and powerful scrum. Ebbw conceded a couple of penalties in the red zone and scrum half David Jones was sent to the bin. Bargoed went for the scrum and after retaining possession and applying pressure Duane Dyer went over for a score right on half time to make it 20-11.

The second half saw Ebbw start with 14 men, and Bargoed were now on top as they retained possession and stretched the Ebbw defence. The pressure told when the visitors were penalised and Prosser stepped up and narrowed the deficit to 20-14 with a 40 metre penalty.

Bargoed had another penalty awarded but this was outside of Prosser’s range so they kicked to the corner only for Ebbw to make vital steal, and ease the pressure momentarily.

Bargoed continued to dominate possession and Ebbw continued to infringe. Bargoed opted for the scrum under the posts and it looked like their powerful scrum would march over but the ball was moved wide with a superb pass from Prosser putting Duane Dyer in for his second with 13 minutes to go. Prosser stepped up and nailed the conversion from wide out to give The Bulls a narrow 21-20 lead.

Bargoed managed to get into a position just outside the visitors 22, but when they lost possession it allowed The Steelmen to get into the Bargoed half, and launch an attack. They moved the ball into the wide channel where Lloyd Evans penetrated the home defence to score from 30 yards out, Jones converted to make it 27-21.

The visitors increased their lead when Bargoed conceded a penalty and Jones stepped up to make it 30-21.

Bargoed were now chasing the game and when they lost possession just inside their half Ebbw put the final nail in the coffin when Josh Lewis crashed over in the final minute to make the final score 35-21.

Bargoed will find this defeat hard to swallow as the general consensus around the ground was that the score flattered The Steelmen with their bonus point victory.

Bargoed deserved more from this game and will be extremely disappointed to get nothing out of it. This was a much improved performance with great attitude and resilience from The Bulls.

The difference in the two sides was marginal, but it was Ebbw’s kicking game through Meyer, Jones and Lewis giving them options all over the field, and a superior line-out that made that difference.

However there were many positives for Bargoed as they held the upper hand at scrum time, and their attack was far more threatening and accurate. They now look forward to playing Pontypridd next week.