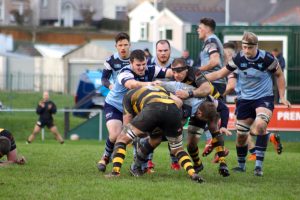 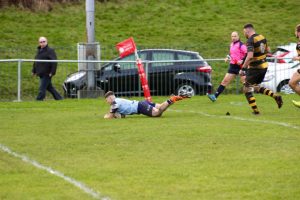 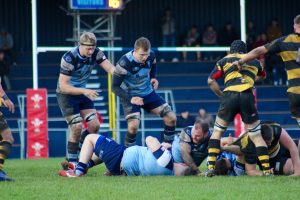 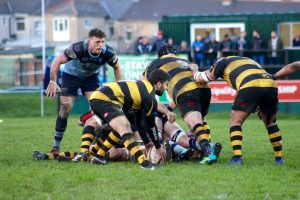 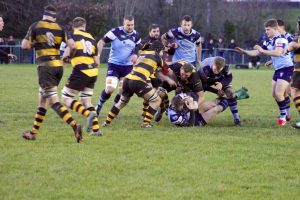 Bargoed welcomed the Black and Ambers, Newport RFC to Bargoed Park for another Principality Premiership fixture.

The hosts started prominently and Newport conceded a scrum penalty early on. The Bulls then played their way into the Newport 22 with some strong carries from outstanding young back rower Ben Fry, and good ball retention.

Unfortunately Bargoed coughed up possession when close to the visitors line and this allowed Newport a brief reprieve.

When the visitors conceded another scrum penalty Josh Prosser converted it into points for Bargoed to lead 3-0.

Newport got back into it after 12 minutes when a poor chase resulted in a couple of missed tackles allowing Newport full back David Richards to break through and win the chip and chase foot race to score the first try, Matt O’Brien converted to make it 7-3 to the visitors.

Bargoed won another scrum penalty and Prosser made it 7-6 before O’Brien responded when Bargoed were penalised at the breakdown to make it 10-6 to the Black and Ambers after 21 minutes.

Bargoed got another scrum penalty and this time decided to kick to the corner but their bold approach didn’t pay off as Newport defended the line-out and forced an error.

O’Brien and Prosser traded penalties to make the score 13-9, and with the visitors pressing hard just before half time Bargoed conceded a penalty and O’Brien increased the lead to 16-9 going into the break.

Bargoed made a positive start to the second half just four minutes in with a lineout drive, and when that attack was stopped, they crafted a superb try which saw Jordan Purcell cross, converted by Prosser to make it all square at 16-16.

Both sides reverted to a low risk kicking game in the opening 15 minutes of the second half, in the battle for possession and territory in this tight and hard fought encounter. However Bargoed were unable to gain a foothold in the opposition half as they conceded a string of scrum penalties.

The turning point in the game came on 58 minutes when Rhys Buckley was firstly yellow carded and then red carded for dissent. Three minutes later Newport scored after moving the ball to the right for a try for Andrew Mann converted by Matt O’Brien to make it 23-16.

Bargoed battled valiantly though and managed to build some pressure in the visitors 22, as Newport conceded a penalty close in.

Bargoed kicked to the corner and drove the line-out, they looked odds on to score but excruciatingly the ball went loose and Newport boldly moved it wide and scored a try in the other corner through Elliott Frewen to make it 28-16

Frewen got his second on 73 minutes and a bonus point try after a loose pass resulted in a kick and chase which the speedster won, converted by O’Brien.

Bargoed fought back and scored at the death with a well constructed try for the impressive Jordan Purcell, converted by Prosser to make the final score 33-23.

Head Coach David Lynch was in reflective mood after the game and commented ‘I thought losing the two front row forwards was catastrophic for us and allowed Newport to exert control in the second half. However we scored two lovely tries, but we gifted Newport three tries from our errors which you can’t do at this level and expect to get anything from the game’

Bargoed will look to a couple of driving line-outs that provided untaken opportunities to score, along with poor discipline as the main difference between victory and defeat. However in general this was once again a promising performance where the result could have gone either way.

Bargoed go again on Saturday with Merthyr the visitors to Bargoed Park for a 2.30 pm kick off.