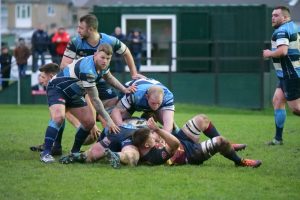 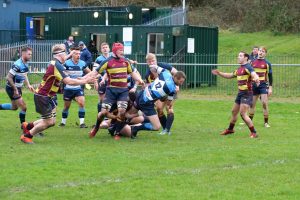 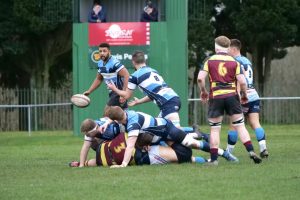 Bargoed entertained Cardiff Met RFC at Bargoed Park in another crucial National Championship tie. The home side were looking to build on the recent victory over Bedwas, and keep the pressure on Pontypool at the top of the table.

Bargoed started well with scrum half James Leadbeater getting a try after 9 minutes which was converted by Steffan Jones.

The visitors worked hard to get themselves back in the game and worked their way into the Bargoed half and then struck on the right side as they used their pace and width to score in the corner with a try from Zach Clow, converted by Harry Johnson.

Bargoed struck back four minutes later when they got the ball wide to Calum Jones who did well to stretch the students defence before offloading to his brother Steffan to score in the corner, which he also converted to make it 14-5.

Bargoed continued to stress the students defence with some excellent work in attack but it was Cardiff Met who scored next when Bargoed conceded a penalty which Johnson kicked to make it 14-8.

The game started to swing in the students favour, getting momentum with Bargoed’s Ali Gardner-Keys being yellow carded.

However Bargoed composed themselves and played the territory and kicking game to launch attacks in the opposition half. They got their reward when back up to a full compliment of 15 they got a second try from James Leadbeater after another great scrum, Jones converted to make it 21-8 at half time.

Bargoed started where they left off and scored again after 43 minutes with Jordan Howells crossing in the corner.

Cardiff Met has no intention of lying down though, and came back strongly in attack, which saw second row Tom Pearson cross after a patient build up, Johnson converted to close the gap to 26-15.

Bargoed made a few changes and increased their lead after playing a scrum penalty advantage as Howell bagged his second, again converted by Jones after 50 minutes.

In this ding dong battle the Met scored again through a Charles Ryland try to close the gap to 40-20. However Bargoed has the last word with a well constructed try at the death from wing Duane Dyer to make the final score 45-20.
They will now look to build on this, but they have a tough encounter this week away at Maesteg Quins, who have won their last two games, and are notoriously difficult to beat at home.